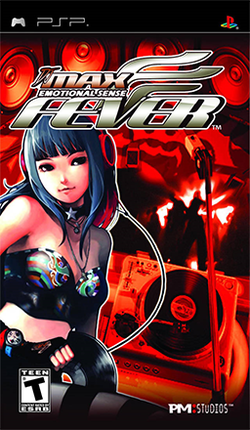 DJ Max Fever is a music game for the PlayStation Portable developed by Pentavision and PM Studios. It was released in North America on January 27, 2009. Although the franchise has made several appearances in Asia, DJ Max Fever is the first DJMax released in the United States and Europe. The game is a compilation of DJMax Portable and DJMax Portable 2 along with additional features. By decision of PM Studios, it is the only title in the DJMax series with a space between words "DJ" and "Max". A digital version of the game was released in January 2010 on PlayStation Network but later removed due to licensing expiring.</p>

The game is mostly based on DJMax Portable 2 but uses the DJMax Portable Black Square Entire Control System, meaning the green notes that appear will stop the music track if missed. There is the auto-correct function, as for example if you hit the ◄ with ▲, your hit will be auto corrected deducting however 20% of the score the note would normally get. 8B mode loading screens don't show the name of the song unlike in DJMax Portable 2. Also some of the "achievement discs" have been changed

Retrieved from "https://djmax.fandom.com/wiki/DJMAX_Fever?oldid=5032"
Community content is available under CC-BY-SA unless otherwise noted.